Showing posts from May, 2019
Show All

Why Mulholland Drive is still my all-time favourite film. 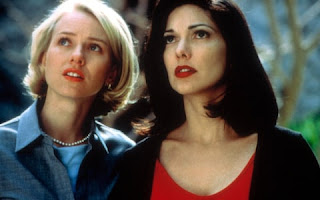 This review contains spoilers If you know me, chances are I’ve probably mentioned David Lynch’s Mulholland Drive to you and how much I love it. I must have been 16 the first time I watched it. I discovered it through “The 100 Scariest Movie Scenes of All Time” on Retrocrush , a website owned by American comedian and writer Robert Berry. It used to be one of my go-to sites for film reviews and, at the time, funny pop culture articles. For a long time, the shower scene in Hitchcock’s Psycho claimed the No.1 spot.  However, in 2007, it was replaced with the Winkie’s Diner scene in Mulholland Drive. I had never heard of Mulholland Drive. Or David Lynch, for that matter. I found a clip of the scene on YouTube - and I was blown away.  I thought it was genius. In this scene, minor character Dan tells his friend Herb about a dream he had about the diner. He remembers being terrified because there was a man hiding behind a wall at the back of the building, with a face Dan
Post a comment
Read more